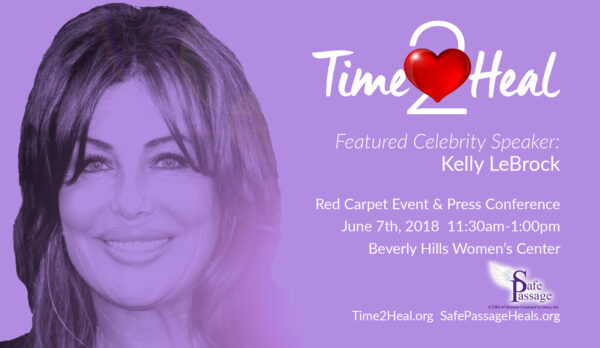 WHAT: Kelly LeBrock, the 1980s supermodel-turned-actress who gained recognition as the face of Pantene Shampoo’s “Don’t hate me because I’m beautiful” commercials and who, through starring roles in such hit feature films as “The Woman in Red” and “Weird Science,” ranked among Hollywood’s sexiest leading ladies of that decade, will be a featured speaker at a press conference to launch Safe Passage’s new “Time2Heal” initiative for victims of abuse, bullying and violence.Time2Heal expands on programs already offered by Safe Passage, a Van Nuys, California-based nonprofit organization dedicated to breaking the cycle of domestic abuse with programs that help heal and empower women and their children to live transformed, safe and productive lives, to include all genders and ages.Time2Heal extends safe, confidential and compassionate help to anyone looking for a way out of an abusive relationship, healing from past trauma and emotional pain from rejection, and a pathway to a victorious life.

WHO: The press conference will feature compelling presentations on the toll all forms of devastation and violence currently are taking in Los Angeles and the outlook for the future to be hosted by Former LAPD and Retired Los Angeles City Councilman Dennis Zine.